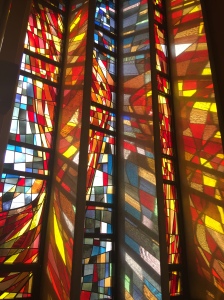 Recently there was a renewal of vows Mass for married couples at St. Catherine of Sweden Parish and they asked me to be the guest speaker at the dinner that followed Mass to talk about marriage. Because most of the couples in attendance have been married longer than I have been and are also probably better at marriage than I am, I was hesitant to do it. But I agreed to do it as my initial contact with the people of at my new parish assignment, which of course we now know I am staying here at Holy Sepulcher. I was supposed to talk for 15 minutes, but I was very busy at work that week and I didn’t have 15 minutes of material ready. So, to fill time I began by having all the married couples stand and then I said, “Couples married less than five years be seated.” Then I said, “Couples married less than 10 years be seated.” This is done sometimes at wedding receptions and it is a great time filler, so I continued up through all the five-year increments, 15, 20, 25, etc. until there was one couple remaining who had been married 65 years. Obviously, this couple should have been giving marriage advice to me and not the other way around, so I went over to them and asked them to share with those in attendance their secret for how they have stayed happily married for 65 years. The husband took the microphone, looked at the crowd, and said, “I keep my mouth shut.”

While the man was obviously joking, there is some truth in what he said that anyone who has been married for any length of time can testify. If you want a marriage that is free of conflicts and disagreements, you pretty much must not talk to each other, or maybe even live in separate homes. You never hear a couple that has been married for any length of time say, “We never had a fight,” or “Our lives together have been perfect.” But many people enter marriage believing that is how it will be, perfect, living “happily ever after” without any problems or troubles. That is certainly far from reality.

As a deacon I can marry couples just like Father Bob and other priests do, although I have never had the privilege in my five years of being ordained. The truth is that if I did a wedding, being married myself for some time now, my homily might last three hours. There is just so much to tell couples. So much they need to know. I would tell the groom that his wife will never look this good ever again. I would tell the bride that this will be the last time her husband will wear pants with that small of a waist size. But in all seriousness, marriage is much different than we think it will be. This year is the 50th anniversary of the encyclical Humanae Vitae which is known for detailing the Church’s position on abortion, but it also talks about marriage. It says, “the difficulties, at times very great, which beset the lives of Christian married couples. For them… ‘the gate is narrow and the way is hard, that leads to life.’” When couples first get married they don’t realize how hard marriage is and how active Satan is at work to destroy it.

Marriage is more than just the wedding day. Couples spend months, sometimes years, preparing for their special day. In fact, I believe that if a relationship can survive the stress of wedding planning, it can probably survive just about anything. We like to think our marriage will be like our wedding day, filled with fancy clothes, catered dinners, dancing, fun, laughter and joy, and sometimes they will be, but there are many more ordinary days filled with sweatpants, leftovers, hard work, and blood, sweat, and tears – sometimes even pain and suffering. While I’m sure some new couples realize their marriage will not be perfect, but when they say their vows “in good times and in bad times,” they do not realize how not so good, or even down right bad, things might become.

In today’s gospel, the Pharisees ask our Lord about divorce, but you will notice that in his answer, Jesus does not focus on divorce, but instead emphasizes marriage. It is a good lesson for couples who live in a society where about half of all marriages end in divorce. Couples need to focus on their marriage. Marriage must be a priority for it not to end in divorce. It’s kind of funny that your spouse is the only person in your family that you get to choose yourself. Your parents, siblings, children, and all your other family members you have no choice in who they are because they are a part of your family by birth. Yet your spouse, your chosen one, is often the family member that is at the top of the list to be disowned and run out of the family.

In today’s gospel, Jesus quotes the book of Genesis when he says, “a man shall leave this father and mother and be joined to his wife, and the two shall become one flesh,” and then adds in regard to marriage, “what God has joined together.” What God has joined together. God is the one who makes the couple one flesh. This is the most important fact that every couple must remember, and so often forget about marriage. It is divine and holy, instituted by God, and God is a huge part of the marriage. It is not a marriage of two, but of three – the couple and God. God is the glue that holds it all together. To give you an idea of how strong the bond is between a married couple and God, holy matrimony is the only sacrament in which the individuals receiving the sacrament, in this case the couple, confer the sacrament on themselves. All other sacraments are conferred through a bishop, priest, or deacon. But in holy matrimony, God confers the sacrament directly upon and through the individuals receiving the sacrament. The priest or deacon is only there to witness the marriage and offer a blessing. That is why valid marriages are held in a church and not at the beach, in Las Vegas, or, as happened this past week, at the Penn State game.

It is said that marriage is hard work, that it is the hardest job you will ever have, but marriage is not just a job, it is so much more important than that. Marriage is a vocation, and a vocation is a calling from God, and in marriage you answer and live out that call with and through your spouse. God’s hand is at work guiding a couple from their first meeting, through dating, marriage, children, and beyond. In my own case, I introduced myself to wife by going up to her and asking her, “Do I smell?” as I lifted my armpits to her face. Only God could be at work for that line to work and for us to end up as a married couple. Any couple upon reflection can see the hand of God at work in their marriage. It becomes harder to see when things get difficult, but God is still there as he was on the day you were married. Nothing can fail when you are following God’s will, and that includes a marriage. That is why it is so important for couples to pray together, to know God’s will for their lives, and to live out their vocation together.

Jesus was never married, and yet he is the perfect example for married couples because our Lord gave of himself completely for us, as spouses must do for each other. He lived a life of sacrificial love. He loves us, even when we don’t love him back. People don’t understand that love is not an emotion or a feeling that we have toward another person. Love is never conditional. “I will love you if you do this or don’t do that…I will love you if you are this type of person but not if you become this type of person…” If you believe that love is an emotion, you will fall in and out of love all the time.

Love is a choice, a choice that you make every day, and being married myself, I know how hard a choice that can be for spouses to make sometimes. Love is giving of ourselves completely to another person no matter what happens, as our Lord has done for us. Married couples must help each other to bear their crosses – for better, for worse, for richer, for poorer, in sickness, and in health, until death. It’s not easy. But as our Lord has shown us, true love is sacrificial and life giving!

Rejoice and be glad!